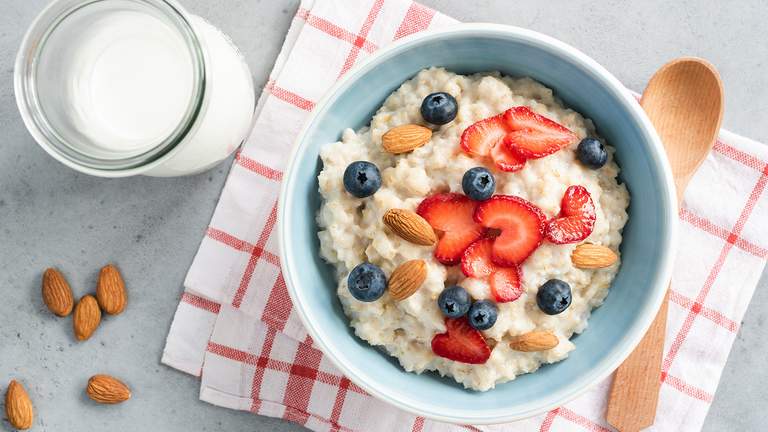 Consumers’ definitions of health reflect an ongoing evolution. Moving beyond the need for lower-calorie or lower-fat content in foods, restaurant goers look for breakfast offerings that offer functionality, freshness and the ability to impart a greater sense of well-being. This issue of Breakfast Brief will explore how particular health claims resonate with today’s consumers as well as ways operators can offer better-for-you fare on menus.

Consumers were asked to select up to three primary reasons they order or eat better-for you breakfast foods, and they provided varied responses around both nutrition and overall wellness. More than a third (35%) indicated that they choose these types of foods to feel physically better (i.e., energized, rather than too sleepy or too full). Nearly the same percentage pointed directly to nutrition and said that they choose better-for-you foods in order to have an overall nutritious diet (34%).

A quarter said that they eat better-for-you breakfast foods to maintain their weight (26%), improve their health in a particular area (25%) or to lose weight (22%). But consumers also signaled that they simply select these types of foods because they like them (24%) and see these foods as being a good fit with their lifestyle (15%).

The smallest percentage of consumers responded that they order healthier breakfast foods for medical reasons or to slow the aging process (8% and 6%, respectively).

To gain a general idea about consumer attitudes around better-for-you breakfast fare, we asked respondents to indicate whether or not they agreed or disagreed with wide ranging statements about better-for-you options for this daypart. Findings revealed that consumers held strong opinions about some factors, but were comparably split on other questions.

Three out of four consumers (75%) either agreed or agreed completely that it is unhealthy to skip breakfast. More than half gave a top-two box agreement response in regards to being more concerned about additives in breakfast foods now compared to two years ago (56%). A similar percentage, 55%, indicated that they’re more likely to visit a restaurant that offers better-for-you breakfast foods even if they don’t end up ordering them. Fifty-five percent also said that they usually consider health and nutrition when they order breakfast.

When asked about their willingness to pay more for healthy breakfast foods, consumers were evenly split: 50% agreed that they would be willing to pay more.

The single highest response, however, was centered on the statement restaurants can offer better-for-you food in a way that still tastes good, with 77% of consumers agreeing. Generation X and Millennial consumers were most likely to agree with this sentiment (81% for each generation), compared to 76% of Baby Boomers, 73% of Matures and 64% of Gen Zers.

Regardless of daypart or dining occasion, consumers regularly say that they keep healthful foods in their consideration set— but whether or not their intention actually matches their purchase behavior is another story. For our research on breakfast, however, we found that the gap between their consideration and purchase of better-for-you foods is relatively small.

When we asked breakfast consumers how often they considered and actually purchased healthy foods, 42% gave a top two box response, indicating that they “always” or “most times” ordered better for-you options in the morning. More than a third (36%) said that they “always” or “most times” purchase a healthy option. This signals that a significant proportion of breakfast consumers both seek out and purchase better-for-you items when such offerings are available.

Women were more likely than men to consider and actually buy better-for-you breakfast foods. Nearly half of women (47%, compared to 36% of men) indicated that they keep healthier foods high in their consideration, while 39% of women indicated a purchase of these types of breakfast options, compared to 33% of men.

Menu descriptions can be utilized to provide consumers with the perception of health. In recent years, we have seen descriptors expand beyond traditional listings of “low” or “free of” contents (i.e., low-calorie, low-carb, fat-free, etc.) to include more “high” contents (i.e., high protein, high fiber, etc.) that also signal health.

Traditional claims centered on avoidants still comprise a large percentage of better-for-you labels on breakfast menus. Of all traditional health claims, “vegetarian” is used most often, according to Technomic’s Menu Monitor. Claims demonstrating lower contents of calories and fat are also common. Some innovative ways low-fat claims are playing out on restaurant menus include:

Although traditional avoidant health traits remain important to consumers, operators are also emphasizing the better-for-you aspects of breakfast dishes by calling out what is in food that boosts its nutritional value. For instance, protein-heavy meals are in high demand at breakfast as consumers are increasingly educated on protein’s energizing and filling effects. As a result, operators are adding protein through traditional breakfast ingredients like meats, eggs and peanut butter, as well as through new protein supplements like protizyme that mix well into batters, smoothies and juices.

Operators are also taking advantage of fiber, which is found naturally in fruits, vegetables and grains. Fiber aids digestion and hastens satiety. Opportunities for increasing fiber at breakfast include:

Instead of traditional breakfast meats like pork sausage and bacon, consider the following:

In addition to foods “low” and “high” in nutritional content, another growing trend is the use of buzzwords that tell a humane and eco-conscious story. Many of these buzzwords create a health-halo effect, meaning that some consumers perceive these descriptors as having a better-for-you quality even if the item contains indulgent content. When thinking about the humane treatment of animals, consumers are seeking out restaurants that purchase from ethical purveyors, meaning animals are not given antibiotics or steroids, or confined to tight spaces. Ethical sourcing can also relate to using suppliers who offer fair wages and proper working conditions.

Corresponding with safe sourcing methods is the term organic. Organic meat regulations require that the animals are fed certified organic food, receive no growth hormones or antibiotics, are pasture-raised and GMO-free. Organic is also commonly associated with fruits and vegetables, which means these items are free of pesticides. Although consumers struggle to define the term organic, most agree that organic fare is better-for-you. In fact, 66% of consumers said that breakfast food or beverage described as organic is healthier; this percentage skews higher among women and younger consumers.

Other menu descriptors that connote clean eating for consumers include “minimally processed,” “unprocessed,” “local” and “natural.” Almost half (45%) of consumers say that breakfast food or beverage described as local is better for you.

Gluten-free has also gained tremendous traction across all dayparts as a better-for you buzzword. In fact, Menu Monitor data shows that gluten-free mentions increased nearly 60% on breakfast menus over the past two years. The current two leading types of gluten-free entrees on breakfast menus are egg dishes and breakfast starch; the latter may seem surprising, but some noteworthy options include:

Unlike health-halo terms directed around the supply chain, the meaning of terms that describe the cooking process of the food are not clearly demarcated. Instead, descriptors like “homemade,” “authentic,” “fresh” and “artisan” differ greatly in how consumers perceive these buzzwords.

Many of these health claims around the cooking process, such as “real” and “scratch made,” help contribute to an upscale, premium food and beverage positioning on the menu. For example, limited-service and midscale chains are touting:

Casual-dining chains are also touting fresh and handcrafted ingredients at breakfast when possible, such as:

3 Areas of Opportunity for Better-for-You Breakfast